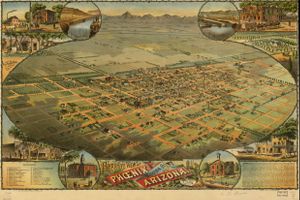 Phoenix resident C.J. Dyer was an accomplished artist, surveyor, and politician who created five bird’s-eye views of Arizona in the late 19th Century. Four of the lithographs portrayed the greater Phoenix area, including a view of Tempe in 1888. Join the Arizona Historical Society and presenter Ed Dobbins on August 5 as he explores the role Dyer’s bird’s-eyes played in the early promotion of agriculture in the valley. As a draftsman, Dyer left many examples of his handiwork documenting the rapid growth of the area. It is his bird’s-eye views made for commercial distribution, however, that continue to provide researchers and curious observers with interesting insights into Victorian-era Phoenix.