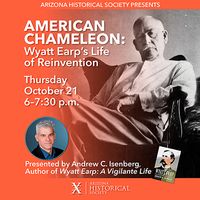 Americans, most who know Wyatt Earp through film, think of him as a lawman so committed to justice that, in Arizona in the 1880s, he did not flinch from vigilante killings when the legal system was too weak to bring murderers to justice. That image is exactly the one that Earp wanted people to have of him. He spent the last decades of his life dictating memoirs in which he edited out his missteps and embarrassments (which included multiple arrests, stints in jail, and a long career as a professional gambler) and appropriated the deeds of others as his own. He presented himself as thoroughly committed to the law and tried repeatedly to sell this version of his life story to Hollywood. Reinventing his past was something with which Earp was familiar: he had been dissembling about himself since early adulthood. Earp told a story of his life in which his vigilantism was consistent with his alleged commitment to justice; in other words, he told a story of justice redeemed by violence. But Earp’s real story, embodied in the many films made after his death, is about the redemptive power of the media. Andrew C. Isenberg Hall is the Distinguished Professor of American History at the University of Kansas. He is the author of Mining California: An Ecological History and The Destruction of the Bison: An Environmental History, 1750–1920, and the editor of The Nature of Cities: Culture, Landscape, and Urban Space.